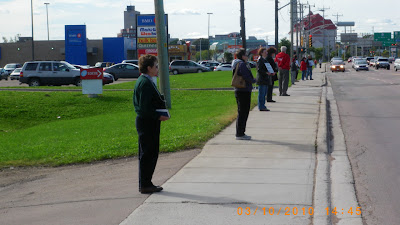 About 50 people joined the Life Chain in Moncton yesterday. The 40 Days for Life vigil too went uninterrupted, with 7 people praying at the George Dumont Hospital during the Life Chain hours.

This time we also had a few protesters; a group of some 5 or 6 pro-aborts (apparently the same folks that countered the 40 Days on Saturday,) stood at the entrance to the Champlain Mall parking lot. Ironically, I found it quite encouraging to see them there, because with all the honks and thumbs up that we were getting, it almost felt like we were preaching to the choir.

But, of course, it wasn't the case; even those who agree with us, often don't know the whole truth. Some of those to stopped to talk to us at the 40 Days or at the Life Chain were surprised to find out that there's no legal restriction on abortions in Canada; somehow there's a common belief that abortions are only allowed until 13-17 weeks.

Some didn't even know that the George Dumnot Hospital (a Catholic hospital, by the way,) performs abortions; that it's been responsible for at least 1 in 4 slaughtered New Brunswick babies for over 4 years now. So we're getting the message out, whether the pro-aborts like it or not. 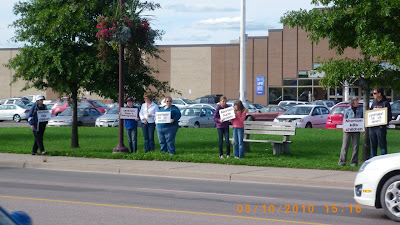